You are here: HomenextTopicsnextPrehistoric settlers’ legacy in the Donard Imaal area

This is a brief overview of the time frame from the Neolithic Age to the Early Medieval Period. 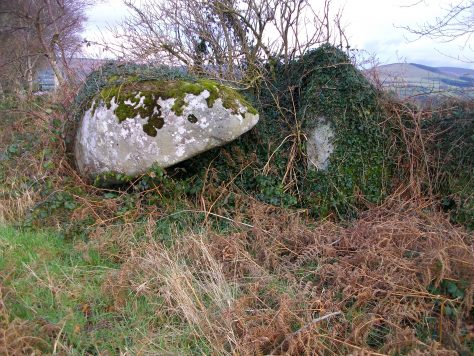 The Neolithic Age extended from ap 4000 – 2500 BC. The Broomfield Dolmen or portal tomb near Donard is evidence for human habitation in the area during this period. While there is no available evidence of habitation before this period it does not mean that it did not happen. The Neolithic Age was the time when agriculture began to replace the hunter gatherer mode of existence and so the two modes may have coexisted for a considerable time. The construction of Neolithic structures such as Portal and Passage tombs required a reasonable degree of community organisation both in time and labour.  Baltinglass Hill and Seefin Mountain have passage tombs on their summits. The agriculturists began the process of deforestation to provide areas for farms and dwellings. Stone tools were used by the farmers at this time for land clearance. The climate during the period was warmer and drier than at present. Blanket bog cover had not spread over much of the country yet. However, deforestation, land use for agriculture, and a cooler, wetter climate eventually brought about the spread of the blanket bog. The Ceide Fields in Co. Mayo with the two metre thick covering of bog over the original worked land gives a good example of the changes which have taken place since then. 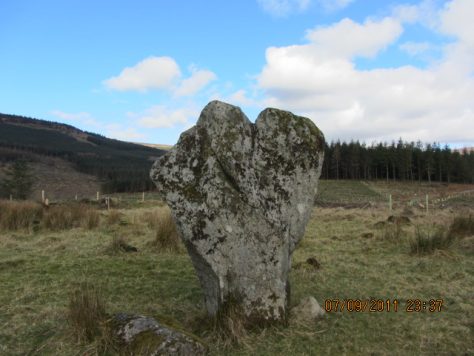 The Bronze Age ap 2500-500 BC began with the introduction of metal working in copper and gold at first and then in bronze, which is an alloy of copper and tin. These metals were used to produce tools, ornaments and weapons. During this period many monuments were constructed around the area such as Castleruddery stone circle, Knickeen Long Stone, Brusselstown/Spinans Hillfort complex, Church Mountain Cairn and the Pinnacle Cairn.  The Ogham writing on the Knickeen Long Stone was done at a later stage – see below.

The Iron Age ap 500 BC – 400 AD followed the Bronze Age with the introduction of iron as a material for tools and weapons. There are no monuments in the area specifically from this period but undoubtedly some of the Bronze Age ones may have continued in use. 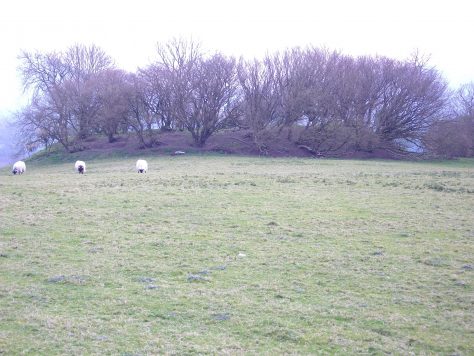 The Early Medieval Period ap 400 – 1200 AD began with the arrival of Christianity. Early churches of the period would have been wooden structures so there are no traces of them. The most obvious landscape features are the ringforts or raths such as those at Kilbaylet Lower and Ballinard. The Donard Ogham stone and the Ogham writing on the Knickeen Long Stone are of this period. Ogham writing was the oldest form of Irish writing, in use between the 4th and 8th centuries, and was discontinued with the introduction of the Latin script on vellum. This was the beginning of written history and with its arrival history was being recorded for posterity.