On the 11th November, 1918 a ceasefire agreement was signed between the Allies and Germany bringing World War 1 to an end (1914-1918). The ceasefire took effect on the “eleventh hour of the eleventh day of the eleventh month”. This day is known as Armistice Day or Remembrance Day. The hostilities ceased but it was the following year that a formal peace agreement was reached known as the Treaty of Versailles.

7 men from the Donard-Imaal area who fought and died in WW1 are remembered on this day.  Their names are listed at the end of the article.

Ireland in 1914 was still part of the United Kingdom but civil war was in the offing because Parliament had voted for Home Rule which would give Ireland limited self-government. It proved a divisive decision resulting in the formation of the anti-Home Rule Ulster Volunteer Force and the pro-Home Rule Irish Volunteers. However, the Unionist leader Sir Edward Carson and the Nationalist leader, John Redmond supported the War effort against Germany and Home Rule was suspended for the duration of World War 1. 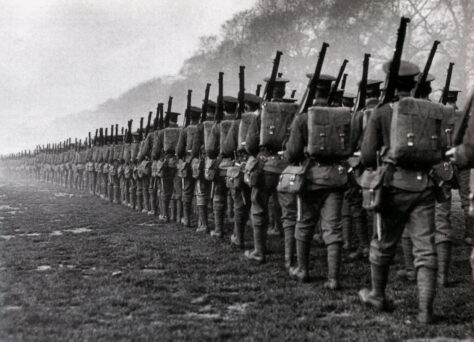 Soldiers marching to the Somme. Anders (CC BY-ND 2.0) via flickr.com

In a speech at Woodenbridge, Co. Wicklow in September 1914, John Redmond called for the Irish Volunteers to enlist in the British armed forces. Approx 60,000 Irish men enlisted in the first 6 months of the war. They were motivated by a sense of duty and naive patriotism, belief that the war was a just cause, a desire for adventure and for economic reasons. 50,000 Irish men were in the British forces prior to the outbreak of war, 140,000 enlisted and 35,000 died. A lot of the Irish served in the 10th Division fighting at Gallipoli, Salonika, Palestine and the Western Front. Others were in the 16th Division fighting at the Battle of the Somme. But in Ireland there was strong disagreement over Irish men enlisting and the battle for a free state continued culminating with the 1916 Easter Rising and the proclamation of an Irish Republic. This was repulsed by a strong British force leading to the execution of the leaders of the Rising. In a 1918 General Election, John Redmond’s Nationalists were heavily defeated. Many of the Irish soldiers returning from WW1 were made unwelcome and had difficulty finding employment. But others who returned joined in the quest for an independent Ireland. Ireland then endured a Civil War from 1919 to 1921. This led to the foundation of the Irish Free State in 1922.

their dead were remembered. 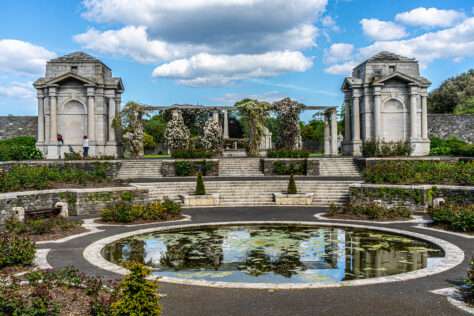 Despite the difficult political situation that the Irish men returned to, their dead were remembered. In 1926 on Remembrance Sunday, some 40,000 people gathered in the Phoenix Park for the commemoration. In 1939, the War Memorial Gardens at Islandbridge were opened. In 1988, the 35,000 Irish men who died in WW1 were honoured by a memorial at Messines, Belgium.

The following 7 men who fought and died in WW1 were born in the Donard – Glen of Imaal area: 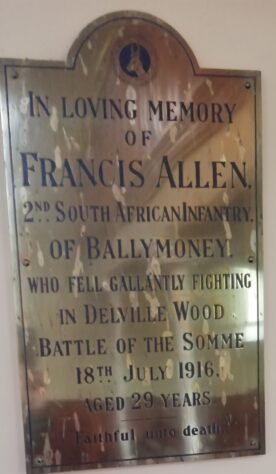