You are here: HomenextTopicsnextThe 12th century Motte and Bailey at Castleruddery

The 12th century Motte and Bailey at Castleruddery 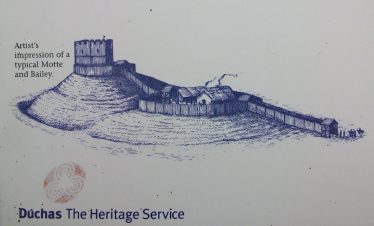 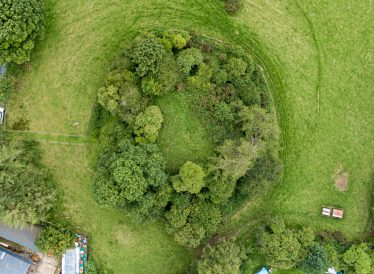 This is a brief overview of the Motte and Bailey defensive structure.

A Motte was a defensive fortification built as a high, steeply angled mound which was surrounded by a deep ditch.  The top of the motte was flat.  A wooden tower, also called a keep, was built on the top and it was surrounded by a wooden palisade i.e. a fence.  The Bailey was an enclosure attached at a lower level to the Motte and was also surrounded by a deep ditch and palisade.   Access between them was via a wooden bridge and ladder  or steep steps.  The Motte and Bailey was also referred to as a castle.

This form of fortification was favoured by the Normans in their conquest of lands in mainland Europe, England, Wales and subsequently Ireland because it was quick and cheap to construct using unskilled labour and readily available materials such as earth and wood.

A defensive feature called a Breteche

If it was a large structure, the Lord’s residence was in the Keep while the Bailey contained the soldiers’ quarters, kitchen, stores, stables, cattle, and workshops.  The Bailey served as the outer line of defence before retreat to the Motte became necessary.   The Keep also served as an observation post and had a defensive feature called a Breteche which was a balcony.  From here the archers fired arrows at attackers outside the palisade.  Breteche is an old French word which evolved in medieval English to Bretais and from this we got Brittas which is a common location name in Wicklow.

Set alight by their attackers

A major weakness of these fortifications was their wooden structure which could easily be set alight by their attackers.  Ultimately, this weakness led to the development of stone castles and the demise of the motte and bailey.  However, the late medieval tower house with the attached walled bawn may be considered the descendent of the motte and bailey concept.  A Bawn is a fortified enclosure around a castle.

Ford of the river Slaney at Ballyhubbock

The Normans often built their primary defences at pre-existing sites of native Irish populations thereby controlling the land and subjugate inhabitants.   At Castleruddery the castle was adjacent to a settlement which included a church at Donoughmore.  It also controlled the ford of the river Slaney at Ballyhubbock.   Castleruddery motte has an internal diameter of 30m.  The Bailey may have been located at the raised area to the south.  The name Castleruddery comes from the Irish Caislean an Ridire meaning Castle of the Knight.

Other motte and bailey structures in the vicinity are located at Donard, Hollywood and Rathmore.  Each of these is adjacent to an old church and in the case of Donard and Hollywood, an ancient track passed nearby.