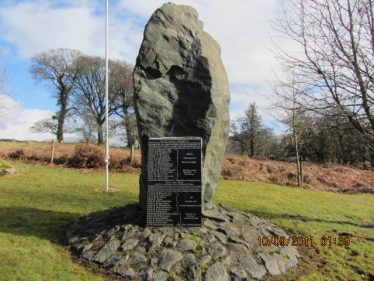 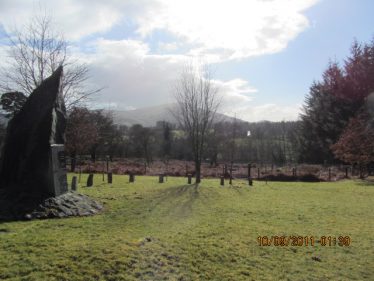 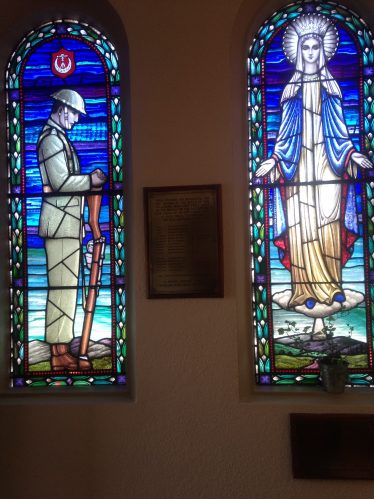 In 1941 there was a tragic accident on the army range in the Glen of Imaal.  Sixteen soldiers lost their lives on the dreadful day when a training mine exploded.

It all went terribly wrong.

On 16th September, 1941 a demonstration of the working of an anti-tank mine was held.  A lieutenant from the Corps of Engineers inserted a charge primer into a mine and it was then covered over with grass or dirt and when a tank drove over the charger it would explode on impact.  This exercise was always undertaken using dummy mines, but on this occasion it all went terribly wrong and sixteen men lost their lives.  Three men were blinded and several other were badly injured.  To this day it is the biggest single tragedy in the Irish Army.

A mark of respect at army funerals

In 1958 a triple panel stained glass window was installed in the church of the Most Holy Rosary at McKee barracks, Dublin.  It is situated in the entrance of the church and the centre panel depicts Our Lady looking down on the Glen and the two outer panes show soldiers with their heads down and their rifles turned towards themselves. Reverse arms is holding your weapon in a backward facing position and is used as a mark of respect at army funerals and other military occasions of mourning.  When in this position the soldier will have his eyes lowered.

To commemorate each person involved

In 1986 a monument was erected at Seskin in the Glen of Imaal naming all those involved.  The centre stone shows the names of all who lost their lives and a flagpole is situated behind the stone. Sixteen stones were erected in a semi-circle with eight stone off each side of the main stone to commemorate each person involved.

In 2016 for the 75th Anniversary, Oglaigh na hEireann produced a booklet which tells the story of the expolsion and those involved(1).