You are here: HomenextPeoplenextTommy Whittle remembers 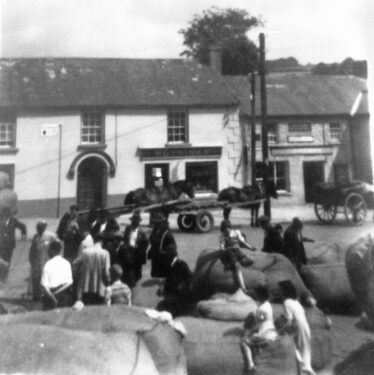 This is a brief look at sheep farming in Donard and the Glen of Imaal in the early 20th century.

I am Tommy Whittle P.C. (Peace Commissioner), born on a farm in Kilbaylet on 1st June 1925. I went to school in Donard in my bare feet like everyone else. I left school about age 13. I was involved in farming all my life.

There used to be a wool sale in Donard every summer. Farmers brought in their wool by horse and cart. The wool buyer was a merchant called Mr. Wynng.  His local agent was a bearded man by the name of Hawkins from the Glen of Imaal.

The breed of sheep was Cheviot

As youngsters we enjoyed being lifted into the packs of wool to tighten it down.  The wool pack was a big bag made out of hessian cloth called sacking. Before you could sell the wool the farmer had to wash the grease out of it by taking it to a deep pool in a river. One man got into the river while the men on the bank caught the sheep and gave them to the man in the water. He dabbed them up and down in the water with the result the water used to turn grey with the grease but left the wool clean. The breed of sheep was Cheviot which was the most suitable to the Wicklow mountains. The shearing was done by hand shears.

Wool was a very precious commodity

At the time, wool was a very precious commodity and a percentage of wool in any garment made it very expensive. To compare the price of wool then to today’s price, it doesn’t bear thinking about. Some farmers were able to buy a farm out of the price of their wool which was running at about one pound per pound (lb). Today it is 55cent a kilo (2.2lbs).

The wool was paid for there and then.

The wool company sent down flat bodied trailers to collect the wool. The packs of wool were rolled up onto the trailer using planks. A spring balance hung out of shear legs to weigh the wool. Sometimes there would be a platform with weights made of iron to weigh the wool packs. The wool was paid for there and then.