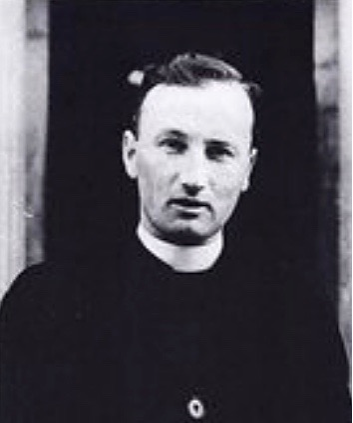 As a painter, myself, I often wondered where I got my creative streak.

Apart from my father, Johnny Flynn, and grandfather, Edward Flynn, Donard who were carpenters and my mother, Bridget Flynn, nee, O’Neill, Whitestown, who was a great knitter and seamstress, I was vaguely aware of a painter on my mother’s side of the family. This was Fr. Jack Hanlon, (1913-68), my fourth cousin, renowned Irish Modernist painter, who was also curate in Donard from 1945-49. During his time in Donard, he took his meals at our house but, unfortunately, we didn’t inherit any of his paintings

I feel very privileged to be related to this fine artist.

If you can stay with me, I’d like to give you a short genealogical overview to show you how Fr. Jack Hanlon is related to me. My great, great Grandfather was Arthur Hanlon, (born in the late 1790’s), from Knickeen in the Glen of Imaal who married Mary Byrne from Hacketstown. His brother Edward lived near Tuckmill. Edward’s son John moved to Dublin and had a son, James. James is the father of Fr. Jack Hanlon.  The Hanlon family became wealthy business people through their ownership of  a chain of butchers shops in Dublin.

Fr. Jack was educated at Belvedere College, Clonliffe, UCD and was ordained in Saint Patricks college, Maynooth in 1939.   For some time he held the position of chaplain in Arbour Hill prison. Alongside his clerical duties he attended classes by Mainie Jellett(1)at her home in Dublin and exhibited with the RHA, at the New York World’s Fair, and the Watercolour Society of Ireland among others as well as the Waddington Gallery in Dublin.  In 1943 he was among the founding members of the Irish Exhibition of Living Art, one of the most important movements in twentieth-century Irish art and where I exhibited in 1985 when the exhibition was held at the Project Arts Centre in Dublin. Although his early work was traditional in style, he became interested in Modernism, and won a scholarship to study under the Cubist painter Andre Lhote (1885-1962), in Paris, along with many of Irelands foremost modernist painters.  He returned to Paris often to learn and study under the guidance of some of the leading artists of the time.  He painted religious subjects, landscapes, genre scenes, and still-life in oils, watercolour, and collage, although he primarily worked in watercolour and exhibited frequently in Ireland and abroad.

He won many awards

He was given many commissions including a set of Stations of the Cross for Church of Stella Maris in Donegal, and also for the Holy Cross Church in Seaview, Isle of Wight, and paintings of ‘St Patrick’ and ‘Baptism in the Jordan’ for St. Patrick’s church, Ardpatrick, Co. Limerick, among others. He won many awards and prizes for his bright and colourful paintings that are full of joie de vie.  In 1948 he was a participant at the olympic games in London.  Unusual as this may sound,  painting was an official event with gold, silver and bronze medals.  Although he did not bring home a medal, he represented his country.

Many of his works are on public display, in churches and in art galleries, Stations Of The Cross and Recreation (Oil on canvas) in the Crawford Art Gallery, Cork, and Firey Leaves in the Highlanes Gallery, Drogheda.

He died in 1968 at the age of 55 and much of his work remains  in many private collections throughout the world.  He  bequeathed fifty-three sketchbooks and one album to the National Gallery of Ireland.