You are here: HomenextPeoplenextEric Hanbidge remembers his past

Eric Hanbidge remembers his past 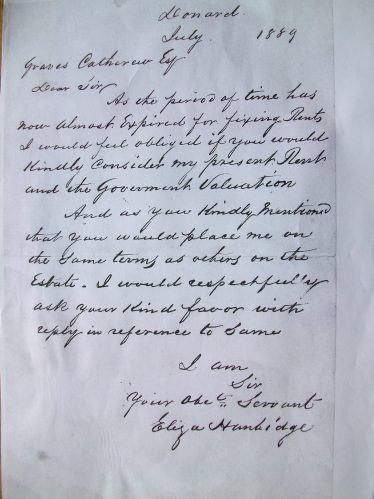 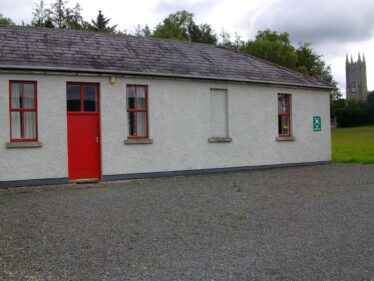 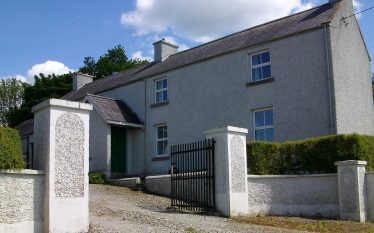 My paternal grandfather inherited a small farm at Donard upper from his brother, who in turn had inherited it from an uncle who died in 1837.  My great grandfather was born in Tinnahinch in the Glen of Imaal in 1808.  He moved to Donard when he married c1850.  He lived only 4 years leaving a widow and 2 sons.

The policy then was that widows were not allowed to hold farms.  His widow was a very strong woman and I have a letter written by her in 1889 appealing to the landlord, Graves Cathrew, to treat her the same as other tenants on the estate.  She succeeded in her appeal. Her name was Elizabeth (known as Eliza) nee Crampton and she came from Colbinstown in Kildare.

I attended a small denominational school

I was born in 1954, the last of 3 children to John and Kathleen Hanbidge and grew up in the old farmhouse which still stands today.  I attended a small denominational school in the Glen of Imaal.  My first teacher sat on a chair at the top of the class and kept a long stick beside her at all times.  If any disturbance happened she would use the stick to beat a nearby press but I don’t remember her using it on any students.  She was replaced by another teacher who I thought was very violent, especially with the girls.  For my last year at primary I had a teacher who was just out of college who didn’t use violence to teach her classes.  Sadly she died very young and I visit her grave at least  once a year.

I started second level in 1965 age 11 years. In November that year the town suffered its worst flooding ever.  The bridge at Stratford plus the overflow arch was washed away as was the metal bridge near Davidstown.

I was too young

I managed to hide my youth well until 4th year when the exam system changed.  The principle, Ben Hooper, came rushing into class looking for an Eric Hanbidge. |He was a small man who smoked cigarettes all the time. Needless to say I got an awful fright  and it took me a little while to admit that I was Eric Hanbidge.  He instantly asked me “what I was doing here”.  Now Ben Hooper was a very intelligent man and I had great respect for him but he wasn’t the first to ask that question.  I eventually declared I had been in this class for more than 3 years.  He asked me did I realise that if I continued in this class I would be sitting the leaving certificate at the end of the year, which he said was impossible as I was too young.

It was decided that I should join with the next class doing the leaving in 2 years time.  I had most of the work done and did very little study for the year and was first in class at all the end of term exams.  This was yet another example of not exactly fitting in with everyone else.

When we returned after the Easter holidays the school would try to put a football team together.  I hated football but because fielding a team was so difficult it was necessary to rope in everybody.   It was quickly discovered that my football skill was non existent so I was put into goals.

We lost all our matches

Sadly this didn’t work out very well as each time I reached to catch the ball I always seemed to miss it by several inches, but made perfect contact with the jaw of the incoming player.  Despite repeated attempts to explain it was an accident it was always viewed as an act of aggression and had to be handled with the utmost firmness.  The result was we lost all our matches when I was in goal and I went home black and blue.

I encountered another problem when in goal by the presence of a good story teller at the back of the goals. The story had a tendency to be quite flat when the ball was down the field but when the ball came up towards the goal the temperature of the story would suddenly increase so I found myself being torn between the absolute need to protect the goal while at the same time not wanting to miss the good part of the story.

I eventually left second level education and in common with everyone else in my class I was convinced I knew everything.  That was in 1970 and I still don’t know what I would like to do when I grow up.