You are here: HomenextPeoplenextMrs Kit Walshe 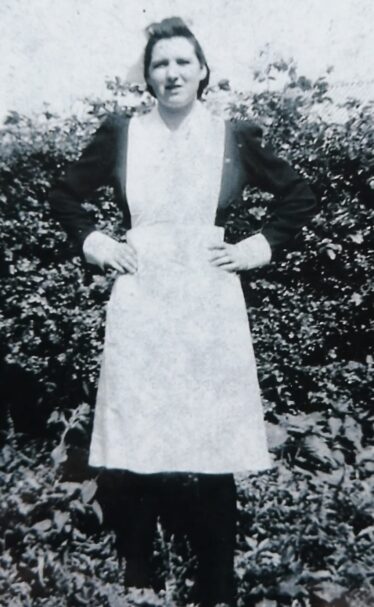 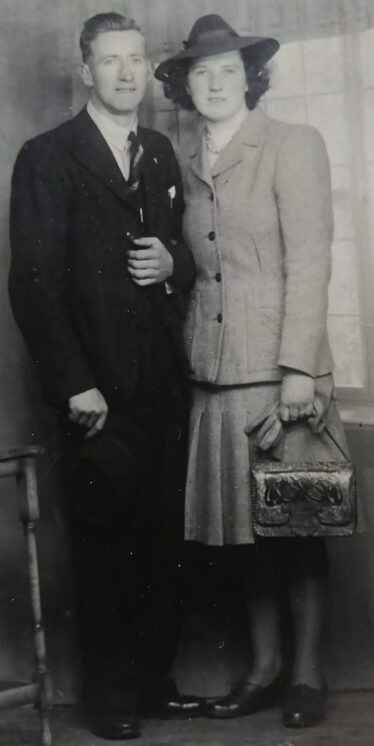 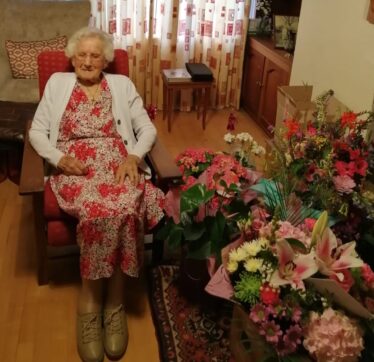 In September of 2021 I had the pleasure of sitting down with Mrs. Kit Walshe of Donard for a  cup of tea and a chat.  The occasion of her 100th birthday had just passed and the house was full of cards and flowers and tokens of love from family and friends, far and wide. The atmosphere of this special occasion still filters through the house and is an acknowledgment of the respect that Mrs. Walshe is held in around the village.

Born in the townland of  Coolamadra in the Glen of Imaal where the family farmed  a small holding.  It was hard work and there were seven mouth to feed.  This hardship was made more difficult by the sudden death of her father when she was just three years old.

“My mother was left with a house full of children, poor times, with a small bit of land to survive on and keep everyone alive”.

All of the children attended school in Donard village with Mrs Walshe finishing her education at the age of 15 years old.

Following a good education, a career as a nurse began in Grangegorman Hospital in Dublin as a sister already worked there.  These were happy years of learning and working.  After several years nursing, home beckoned as another sister married and left the farm to start a new life with her own family.  Working the farm included sowing and thinning potatoes and snagging turnips.

It was not all farming and Sunday evenings were spent at local dances with friends.  One particular dance took place at Poulaphouca.  The accordion player was a handsome young man by the name of Tom Walshe from the village of Donard.  A carpenter by trade and musician, he carried his accordion around on his bicycle to local dances.

The wedding took place in Donard church on 18th April, 1945.  The ceremony took place in the church at 11.00 mass and the wedding breakfast was attended by family and friends in the family home.  The honeymoon was a trip to Dublin by hire car from Blessington followed by a stay at Barry’s Hotel in the city.  The official wedding photograph was the first task undertaken on reaching the city and that photograph is the one we see here.

Home on return was the family home at Snugborough and the family grew. They were blessed with  nine children. Unfortunately two children died as babies.

Tom worked as a carpenter, having learnt his trade with Valentines company and worked  for the Irish Army in the Curragh camp for many years, cycling over and back every day.  Many years later there was enough money put aside to buy a small car.  In 1954 we built our own home in the centre of the village.  We made the blocks ourselves and Tom did all of the carpentry.

“Thanks be to God almighty we got on gallant, we never fought, we might have a slight argument, but nothing, we were as happy as Larry. He was great with the children”.

All the children went to primary school in the village and either Baltinglass or Dunlavin for further education.

“While all the children were young, I knitted and made everything for them, petticoats and nightdresses. I knitted all the socks for them. But my hands  are not so good anymore”.

Mrs Walsh  was a founder member of the Donard ICA. She was in attendance on the first night and a nice crowd arrived to support the club. A committee was formed and the meetings were held on a regular basis.  It was the only thing available for young mothers in the area and became a great support for women all around the country.

These days Mrs Walshe is on Zoom calls with relations all over the world and in particular her niece Deirdre in America and they attend mass together over the internet.