You are here: HomenextPeoplenextLiam Price 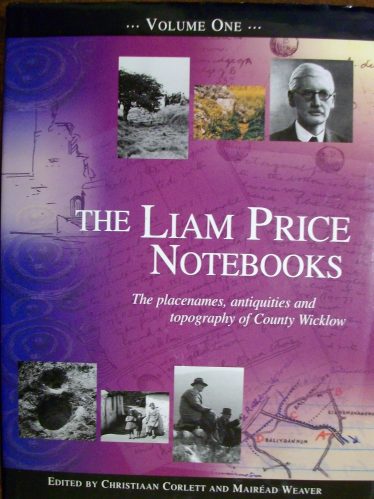 A brief history of Liam Price.

“Do not underrate the value of local history. It can make contributions to every branch of history.”

So wrote William (Liam) George Price in his famous notebooks about Wicklow place names written between 1928 and 1966 and first published in 2002. 1

Price was born on 23rd February 1891 and lived his early life in Dublin’s Leeson Street. He was educated in Aldenham public school in England and then at Trinity College Dublin where he read classics. He also qualified as a barrister. From the 1940s he lived at Castleruddery Park near Donard, Co. Wicklow.

He practised law in the Dail Department of Home Affairs Courts. In 1922 he was appointed District Justice serving in Mullingar, Kilkenny and finally Wicklow. In 1923 he married Dr. Dorothy Stopford, a medical doctor who became a champion in the fight to eradicate TB in Ireland.

During the World War 1 he was in the Army Pay Corps serving briefly in France.  He was in Dublin city on Easter Monday 1916 and saw the uprising first hand.   As a result he became sympathetic to the Irish Nationalist cause.   He served on the National Monuments Advisory Council, the RIA Archaeological Exploration Committee, the Folklore Commission, Irish Place Names Commission, Royal Society of Antiquaries of Ireland and County Kildare Archaeological Society.

While Price was not a fluent Irish speaker he acquired a good working knowledge of the language which stood him well in his much acclaimed work, “The Place Names of Wicklow”. With his passion for archaeology, history, folklore and place names he travelled widely around Ireland and took part in a number of archaeological excavations.

An example of his work on place names is Annalecky or “Ath na Leice where Ath is a ford and Leic is a flagstone. The ford was where the road now crosses the Carrigower River by bridge”. 2

The 2002 published Notebooks are available to view in the reference sections of public libraries.