You are here: HomenextPeoplenextFrom Donard to Japan and back again

From Donard to Japan and back again 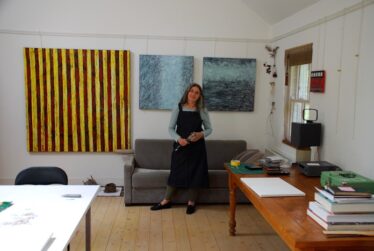 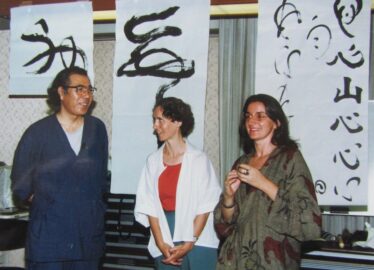 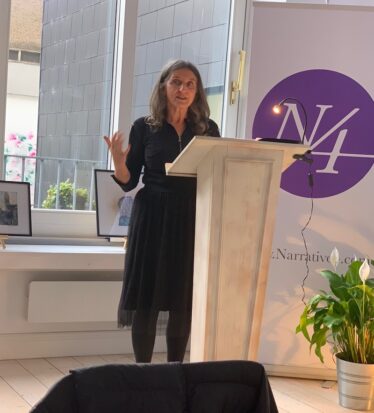 I had the privilege recently of being invited to the studio of local artist and poet Pauline Flynn, a native of Donard village, whose work has taken her to the far side of the world and back home again.

Working on a painting that is destined for America, I was delighted to get a preview and a tour of this very special space.

Pauline began her love of art at a very young age and was raised in a house which was very creative. Her father was a carpenter and her mother, like so many women of her time, knitted and sewed and worked with her hands.  Pauline was often to be found in her father’s workshop painting landscapes using his leftover pots of paint and making something with the off-cuts of wood.

Pauline was lucky when she attended school in Baltinglass where the art teacher, a nun by the name of Sister Immaculata, saw her talent and encouraged it by giving extra time and broadening the scope of the work in art class.

opened up a whole new world to Pauline

Art College was not the next step and a career as a secretary took Pauline to Dublin, but within a few years a place at Dun Laoighaire School of Art and Design opened up a whole new world to Pauline.  At the time the School was very progressive in its thinking and followed the principles of the Bauhaus movement in Germany. The Bauhaus movement leaned heavily on modern creativity as opposed to the purely academic.  Pauline later moved to the National College of Art and Design graduating in 1985 with a B.A. in Fine Art Sculpture/History of Art.

Pauline began her career in the world of performance art, performing at venues like the Project Arts Centre, the Guinness Store House in Dublin and Battersea Arts Centre in London.  This was following a semester at the School of Art Institute of Chicago where she had studied the art of performance, lighting and sound design, movement and drama.

Because of her experience in performance arts she was employed as assistant to the Director of the first Dublin Street Carnival 1985.

There was only one place available

While studying at Dun Laoighaire School of Art and Design, Pauline met Moya Bligh, an artist from Kilkenny  who  lived and worked in Japan.  She introduced her students to Japanese woodblock printmaking.  Moya had gone to Japan on a scholarship and Pauline took the  opportunity to apply for the same scholarship through the Irish Department of Education  and the Ministry of education in Japan.  There was only one place available and her application was  successful.  In 1987 she travelled to Japan and spent the following two and a half years as a student at the Kyoto University of the Arts.

Pauline fell in love with Japan and on her return to Ireland she enrolled in a post graduate course at University College Dublin in the History of Art Department, specialising in Japanese art.

Mrs. Yoshiko Ushioda at the Chester Beatty library was her supervisor and Pauline applied for a scholarship through the Japan German Centre in Berlin to do the research in Japan.  She was awarded the scholarship in 1991 and spent a further year studying in Kyoto.  The subject undertaken was ‘the history of the kite as a contemporary art form’, so of course,  membership to the local kite club was a must. There after followed a year of travel around Japan flying kites and discovering the culture and history of this art form.

“Japan was the beginning of my life as an artist”

Returning from Japan, a career began as a professional exhibiting artist.  She also found work as a lecturer at NCAD, firstly as a visiting lecturer and following that a part-time position with the night school.  She and  2 other lecturers  developed an accredited course in visual investigation. Twenty years of working in the night college allowed her to work in the daytime spent  in her studio.

More recently Pauline has completed an MA in Creative Writing from UCD and  was shortlisted for the Patrick Kavanagh Poetry Award in 2010.  She is part of a writing group and continues to work in her studio in Donard.