You are here: HomenextPeoplenextMichael Dwyer (1772-1825) 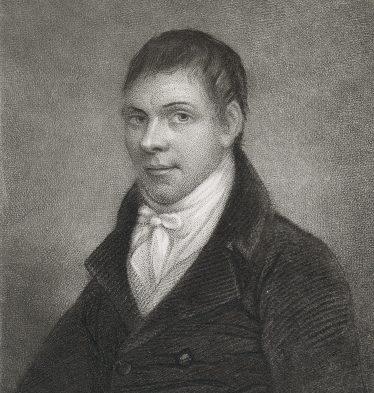 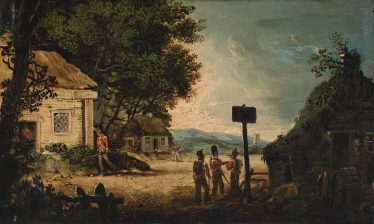 zoom
The Search for Michael Dwyer by William Sadler the Younger.
National Gallery of Ireland 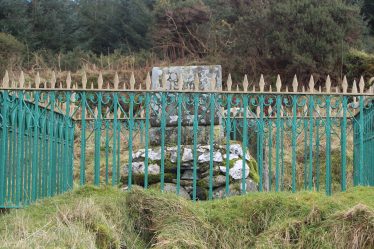 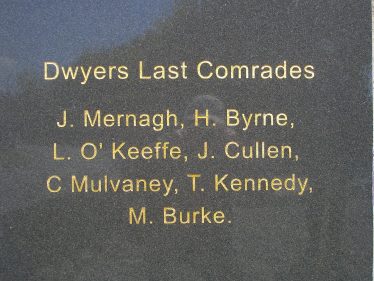 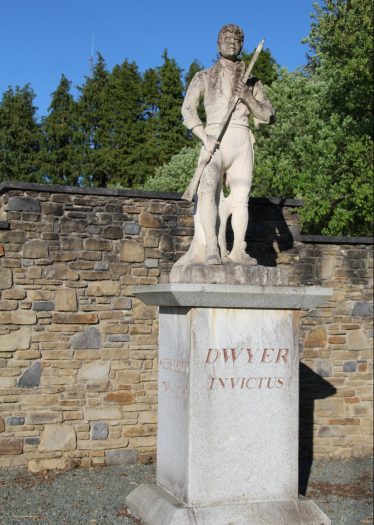 Michael Dwyer is a legend in the Glen of Imaal.  This is a brief account of his exploits.

He was the first of seven children born in 1772 to John and Mary Dwyer at Camara, Glen of Imaal, Co. Wicklow.  The family moved to a 24 acre farm in Eadestown in 1784.

The authorities became relentless in their pursuit of the rebels

In 1797, Dwyer aged 25 years, joined the Society of United Irishmen.  He fought against the British authorities with the Talbotstown rebel group in the 1798 Rebellion.  Following their defeat in Wexford, Dwyer continued fighting under General Joseph Holt.  When Holt surrendered, he continued to rebel for four more years with  a group of like minded men operating in the Wicklow mountains.  It is said that Dwyer discharged his Blunderbuss into a window of Plants pub at Castleruddery while some local yeomen were drinking inside.  Plants pub is now known as the Glen Lounge.  From 1798, the authorities became relentless in their pursuit of the rebels especially in West Wicklow.

Sheltering from a snow storm

In 1799, he narrowly escaped capture.  Dwyer and his men were sheltering from a snow storm in a small cottage in Dernamuck.  An informant gave up their location and a force of 100 men surrounded the cottage.  He refused to surrender and the soldiers set the cottage alight.  Some of Dwyers’ men were killed, including McAllister who sacrificed his life to allow Dwyer to escape.   McAllister is buried in Kilranelagh graveyard.   The cottage at Dernamuck was restored between 1946 and 1948.  It has been renovated by the Office of Public Works and re-opened to visitors in 2022.

There was no let up in the search for Dwyer and in 1803, having lost a lot of his men to the conflict, Dwyer surrendered to William Hoare Hume MP.   He was detained in Kilmainham Gaol and in 1805 deported to New South Wales, Australia along with his wife and their two eldest children. *(See notes below)  He was given 100 acres of uncleared land not far from land allocated to some of his Irish compatriots – Hugh “Vesty” Byrne, John Mernagh, Arthur Devlin and Martin Burke.

Dwyer’s life in Australia was as colourful as his life in Ireland.  In 1801, he was tried for sedition but was acquitted.   Even so, he was still sent to Norfolk Island and then to Van Diemen’s Land.  By 1810, he was allowed back into society.  Between 1810 and 1825 he became financially successful but fell foul of the law and was declared bankrupt and incarcerated in Sydney’s Debtor jail.  That is where his life ended after contracting dysentery while imprisoned.

He and his wife, Mary Doyle are buried in Waverley Cemetery in Sydney.

Michael Dwyer’s Irish born children – Mary Anne (1799), John (1801), Peter(1802) and Esther (1804) – all remained behind when their parents were sent to New South Wales. They were cared for by family, and ultimately by Dwyer’s sister in The Liberties, Dublin. The Governor of Kilmainham Gaol, the notorious Dr Edward Trevor, known as “The Devil’s Partner”, had promised to send them on after Dwyer had settled in. This was one of many broken promises made by him.

His youngest three children – James, Brigid and Eliza – were all born in Australia.

The eldest children finally arrived in Australia in 1828, 3 years after Dwyer’s death on 23 August, 1825. Sadly then, he was never to see his eldest children after leaving Ireland.

All seven married in Australia and raised quite large families. George Cargeeg’s book, The Rebel of Glenmalure, provides detailed lineages.