You are here: HomenextPlacesnextRules for Imaal Camp 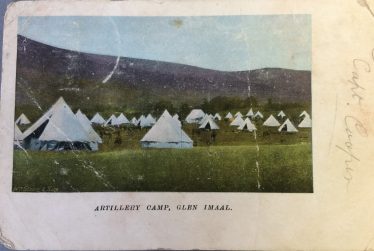 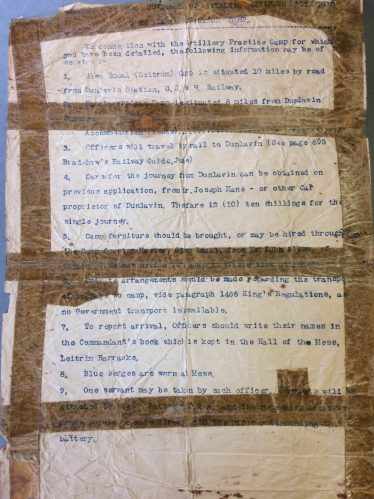 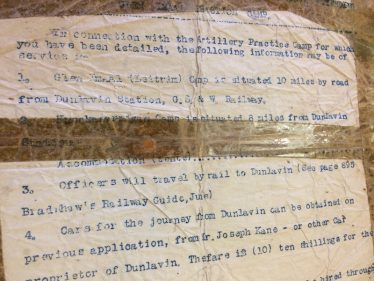 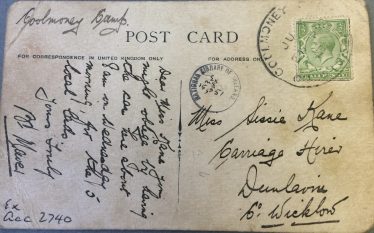 While researching the history of the village of Knockanarrigan,  I spent some time in the National Library of Ireland.  The task was to find and  read anything with a reference to the Glen of Imaal.  Using the online catalogue of the National Library I ordered a file which contained information which might be of use. Several days later the research was made available to me in no. 2 Kildare street.  A folder was brought to my table and the following was its contents.  It was a very old and a barely held together piece of paper with a list of details for attending a summer practice camp at Leitrim barracks at the turn of the last century.  I found it interesting in the way times have changed and says so much of the privilege afforded to officers in the British army in the past.

In connection with the artillery practice camp for which you have been detailed, the following information may be of service.

Notes on the Transcript.

The blue serge outfit worn at mess, refers to the uniform required in the mess as this was the official officer space.  It was important for the officer to know the dress code for each camp to be aligned with his colleagues.

R.F.A. refers to the Royal Field Artillery.  This branch of the British army provided medium artillery and was the largest arm of the army.  Working alongside the field artillery was the the Royal Horse Artillery, created to provide support, as horses pulled large guns and canons and all the supplies needed at that time.