Poem by Pauline Flynn that relates to the Roman bust in her Grandfather’s workshop Donard. 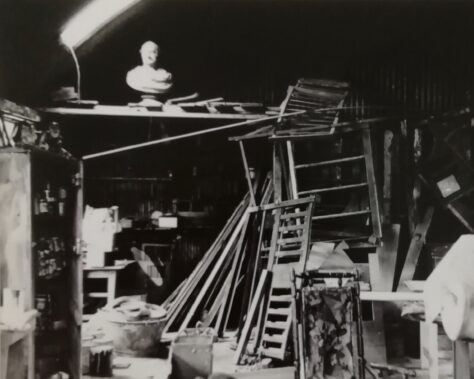 I was cast from a classical man, my countenance polished to enhance strong bones, fine
features. Made for a grand colonnade, my own niche.

Dealers dickered over me from one musty interior to another, packed me in crates filled
with wood shavings, shipped me across rough seas in dark holds from one country to
another, one big estate to another, one great drawing room to another until a carpenter
picked me up at an auction house in a cold northern city. Picked me up as a curiosity, a
trophy from the last ancestral home where I had been placed on a marble column in an
imposing hallway.

I didn’t fit in his house. He put me up on the rafters in his father’s old workshop above
un-hewn oak and ash, their scent dissipated, heavy workbenches scattered with rusty
hammers, chisels no longer honed by the grit of the whetstone, an unfinished coffin on a
trestle, its purple satin, straw filled pillow on the floor.

Children crawled through a gap in the door, played for awhile among planks high against
the walls, empty treasure chests and pulled cobwebs from windows to let the sun in, but
no one has come for a long time now.

I keep my dignity, my eyes centred on a distant point.