You are here: HomenextKeywordsnextGlen of ImaalnextPierce's Table on Lugnaquilla Summit 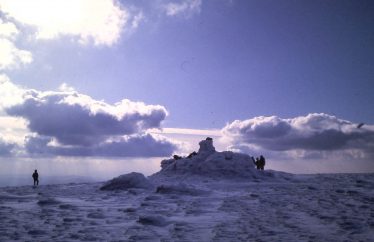 In 1822 G.N. Wright Irish author and Anglican clergyman wrote a book called “A Guide to the County of Wicklow” in which he described the summit of Lugnaquilla.  He ascended the mountain with a local guide.  Wright states the highest point was marked by a large stone resting on small stone supports similar to a cromlech or dolman and that it was called Pierce’s Table.

The name Pierce may be a misrepresentation of the name Percy.   Percy is a surname known in the Glen of Imaal since 1734.(1)