Hollywood Glen from Athgreany to Donard 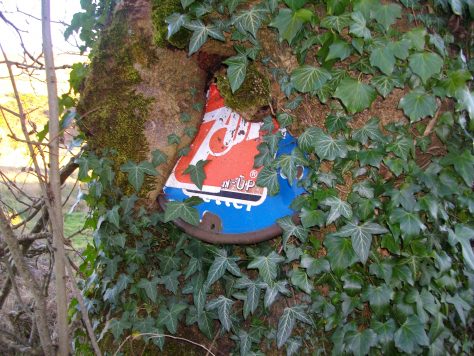 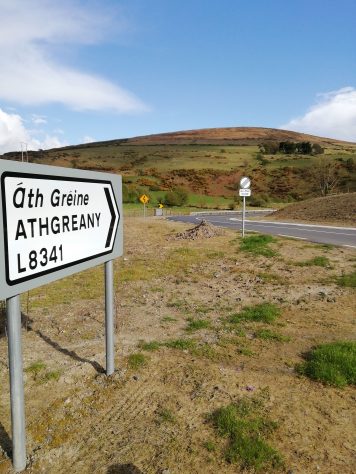 This is a journey of fact and folklore beginning at the turn-off from the N81 after Hollywood. Upgrading the N81 is folklore but it proved to be a fact that Wicklow county council would take out the dangerous bend known as Deering’s bend. So, let’s begin the journey.

The first notable point is on the left where the old road from Hollywood meets the Hollywood Glen now marked with a St. Kevin’s Way sign. 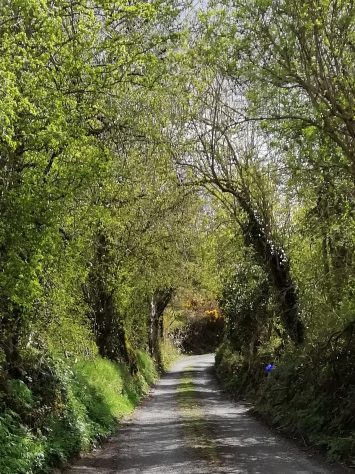 Continue until another sign indicates a left turn for St. Kevin’s Way. This goes up towards Toor and is called Scalp Lane and Puzzle Road. The latter name refers to the upper part of the road which twists and turns like a puzzle.

Then crossing the Toor Brook at Athgreany bridge dated 1900, there is a lime kiln on the right. There were also 2 Murrain Crosses in this area, but they no longer exist. The Toor valley which enters from the left is a glacial outflow. 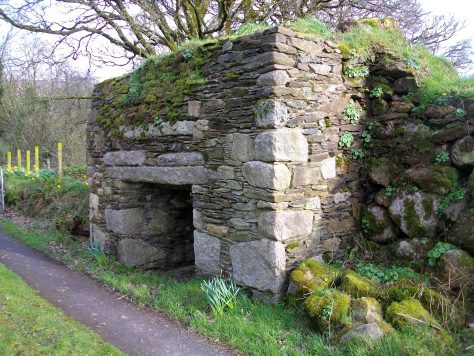 Next, high up on the left is the Dunboyke graveyard and church. The church is in the centre of a sub-circular graveyard defined by an earth and stone bank with external dry stone facing. There are 2 simple granite slabs with Latin crosses in the nave of the church and another immediately south-east of the chancel. A Bullaun Stone is set on top of the west wall of the graveyard. There is also a mill stone on the site. This graveyard and church are on private property and are unaccessible without permission from the owner.

Continuing on, you pass through a deep valley with Conlon’s Hill on the right which has a standing stone and rath, and Church Mountain is on the left. We then arrive at the junction for Chaney’s Lane which is on the right. The Chaney family held land in this area in the 1800s. A John Chaney of Donard was assassinated in 1798.

Many of them died 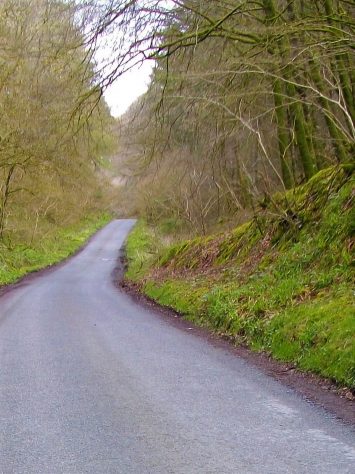 The section after that junction is supposed to be haunted. The story goes that during the Famine, groups of people travelled along that road and many of them died. On the upper slopes on the left side, there are ruins of deserted houses. On the right side, in the valley, it is reputed that there is a 597AD battle site where the High King of Ireland called Aed was killed. 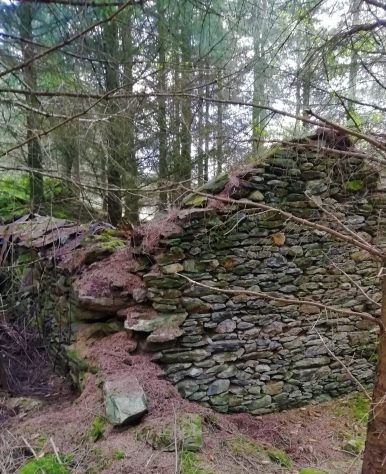 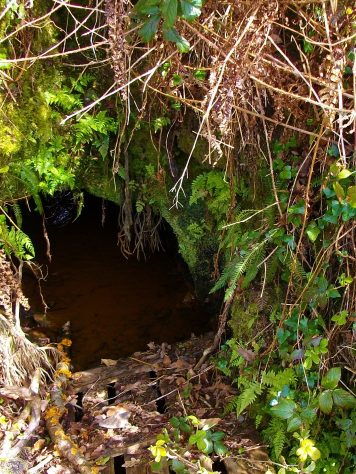 As you go through the S type bends further on, there is the Spa Hole on the left where a World War 1 German spy is said to have hidden. The Spa Hole itself is a disused iron mine.

Continue on to the Kilbaylet townlands. There are 2 raths on the left just before Box Bridge. This section is called Allalone – a most unusual name that is mentioned in 1798 in a compensation claim. Also at Box Bridge on the left, is the Fairy Stone. Folklore has it that if you put pebbles into the 23 holes in the stones, they will have disappeared by morning. This rock is also an example of pre-historic rock art.

Continue over Box Bridge which crosses the Dolls Brook.  Adjacent is a townland called Intack. This name is an English term for land taken in from uncultivated ground. 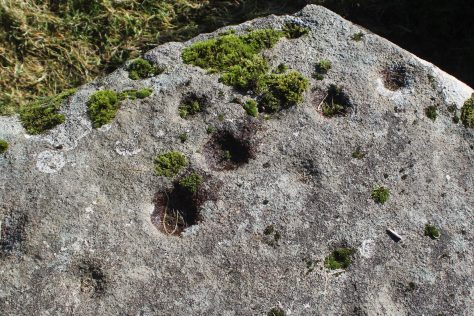 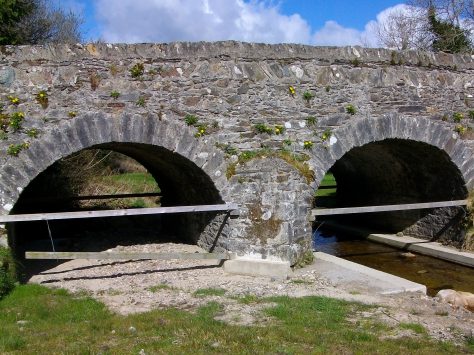 Next up is Hellkettle Bridge over the Browns Beck Brook. Hellkettle is an English term used to describe a supposedly bottomless pool. Liam Price was of the opinion that the pool was perhaps filled up when the bridge was built but it may be related to another deep pool further upstream. It is said that a man tragically drowned in that pool.

You are now on the approach road to Donard village. On the left is the old Church of Ireland presbytery. On the right further on is the modern graveyard and Catholic Church built in 1926. 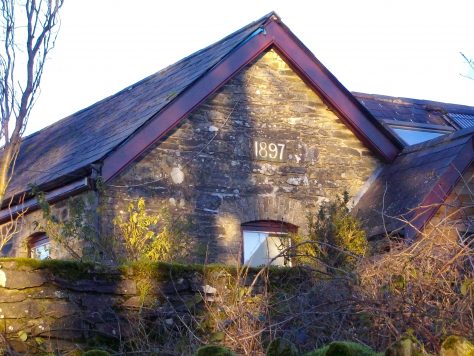 On the left, is the old C of I school dated 1897, now a private house. Then the modern C of I presbytery is on the right followed by the C of I Church c1835 on the left. Next up is Mountfarris house c1840 also on the left. 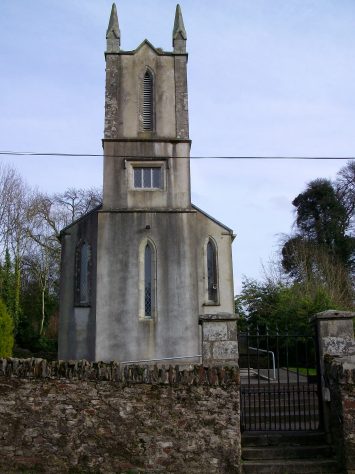 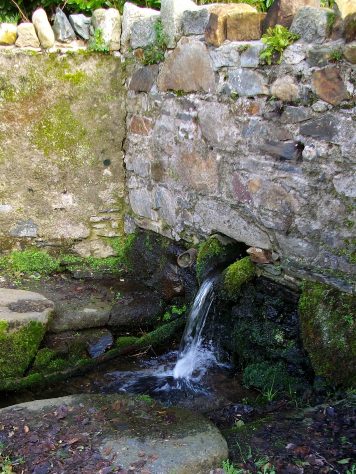 Further down the hill on the left is the High Spout which was once the fresh water supply and clothes washing area for the village. Across the road is Donard Demesne c1780 where Norris Davidson once resided.  And on the other side of the road is the  Gate Lodge c1855 and entrance to Donard House c1810.  And so, you are now in Donard. 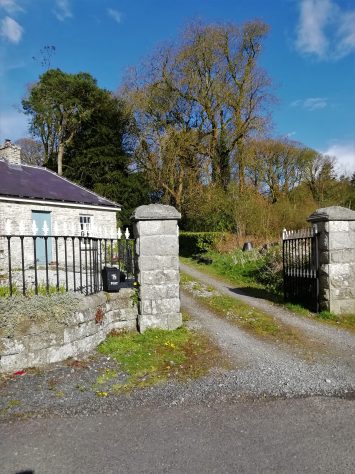 The Lodge at entrance to Donard House. Oonagh McElligott © 2021

P.T. Walsh: The Journal of the Royal Society of Antiquaries of Ireland 1931.