You are here: HomenextPlacesnextFAIR DAYS 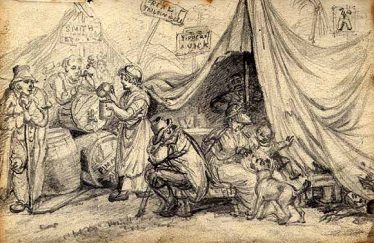 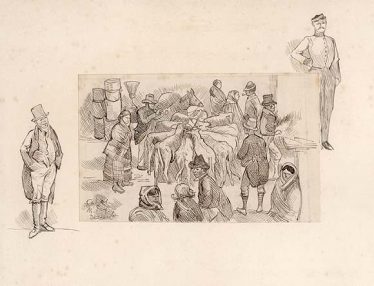 Up until early in the 20th century Market days and Fair days were a very important part of rural life in west Wicklow.

Markets were usually a weekly occurrence where local people brought their produce to sell and the money earned was very important as it was used to pay rents and tithes.  Local produce such as butter, eggs, bread and poultry would be sold. Also available would be linen and weaving and basketry depending on the location. Stratford was renowned for the quality of its meat and it is said that the butchers of Donard got their meat there.1

Where markets were weekly events, Fair Days were twice a year and a much bigger affair altogether.  The Fair lasted for 2 days and had a livestock sale and a grain sale.  Buyers would arrive from the big towns and cities to get the best local goods.  Frieze blankets and cloth from the factory at Knocknamunnion in the Glen of Imaal would be on sale. The most important part of the Fair was as a place to find employment, either on the land or the local factory.

Markets and Fairs were regular events with large numbers of local people in attendance and this made them ideal for the passing on of information from the government of the day. Politicians and political figures used them in times of unrest and turmoil to broadcast their message.  With many people not being able to read or write and no radio to pass the news around the country, the market and fair days became very important.  The Anti-Tithe protests were organised this way to great affect. Michael Dwyer and his men would disrupt these fairs as they were attended by the local Yeomanry and became an  ideal time to attack their foe.

Fair Days were held twice a year and lasted  two or three days.  They were  a great excuse for enjoyment.  Many of the fairs held an alcohol licence which helped to lighten the event.  Entertainers followed the fairs around the country and it was the only time in the year many people got the opportunity to see a play or have their fortune told or to buy some ‘Snake oil’ to cure all their ailments. It is known that madame Taussaud and her wax sculpture exhibition travelled around Ireland entertaining the locals.

Castleruddery was the Fair Day location from 1620s, held by licence from King Charles 1st.

1st May and 31st October being the dates the fairs  were held on annually. Historically the dates picked were suited to the harvest times and local agricultural customs.  There was also a market day every week and these were mostly held on a Wednesday or Thursday and never on a weekend, by royal decree.

From the 1740s Castleruddery was an important Toll road and was known as a turnpike road up until the 1840s.  The land around the crossroads was the site of the fairs.  The Duchas folklore essays which were written in the 1930s recall the local events as told by the older people of the area.  In these essays there is mention of the sheep fair at Castleruddery crossroads being held on 3rd July every year as late as the 1940s.2