You are here: HomenextPlacesnextDonard Motte (The Ball Moat)

Motte is the old French word meaning mound generally made of earth.  The Donard motte was most likely built by a Norman called Jordan de Marisco between the years 1169 and 1190 as a deed made by the Archbishop of Dublin John Comyn in 1190 states that Jordan de Marisco was tenanting Donard at that time.  Jordan and his brother Geoffrey, who built the motte and bailey in Hollywood, were nephews of the Archbishop.  The Irish name for Blessington i.e. Baile Coimin may come from the Archbishop’s surname Comyn.

A 1997 study states that the mound is largely natural and was therefore an obvious location for a motte.  There may have been a rath there before Jordan began work on the mound.  The land Jordan tenanted housed a monastic settlement on the site where the medieval church ruins and graveyard now stand and so it was in the remit of the Archbishop to grant the area to his nephew Jordan.  Jordan built up the mound and levelled off the top so that a keep or tower could be built on it.  In 1997, the flattened top measured 24 metres across but today it is less so that it is likely that 800 years ago it was bigger.  The keep would have been made of wood rather than stone as timber was easier to get and so the installation would have been erected quickly and cheaply.  A palisade or wooden fence surrounded the top of the motte. 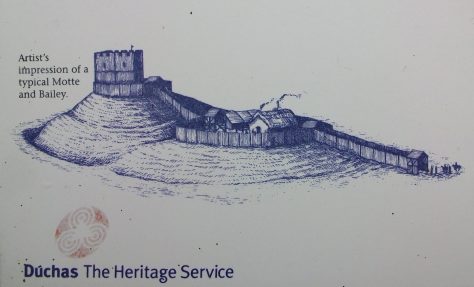 The Donard motte may have looked like the one at Castleruddery but there may not have been a large bailey below the motte.  A berm (horizontal shelf) and a deep ditch (fosse) would have surrounded the motte and access to the keep would have been by an earthen ramp.  The berm at midway down the steep slope of the mound stabilised the earth above and prevented any falling timbers from entering the fosse during an attack when they may have facilitated the attackers crossing the ditch.

It is to be noted that no two motte and baileys were the same as their designs depended on the local topography.

The Donard motte is on private property and subject to a preservation order under the National Monuments Act.