You are here: HomenextPlacesnextBroomfield Dolmen 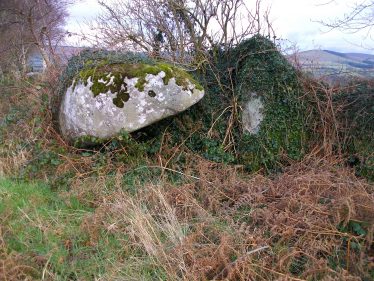 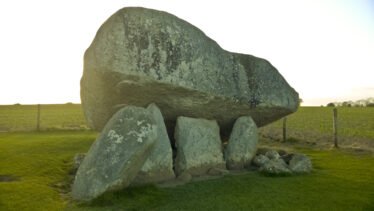 A dolmen is a portal tomb dating from the Neolithic period.  The dolmen described here is in a field on private land on the right side of the road from Donard to Annalecky Cross.  Originally, it had a large capstone on top supported by 3 big upright boulders leaving a small chamber beneath.  This chamber held the cremated remains of the deceased.  A cairn may have surrounded it but no trace of this remains.

Unfortunately, the dolmen is in a ruinous state today.  The 4 boulders now lie close to the boundary wall of the field.  There are 2 stories told about it’s destruction.   Firstly, that the capstone was pushed over by 3 men from the local Mill for a wager.  Secondly, that a religious fanatic who had a strong desire for the destruction of all pagan symbols had the capstone thrown down.

Some of the Dolmen capstones are impressive e.g. the Brownshill Dolmen just outside Carlow town is estimated to weigh 100 tons.

P.T. Walshe:  The Antiquities of Dunlavin-Donard District, Journal of the Royal Society  of Antiquiries of Ireland.  Vol LXI. 1931